First wife Diane and I travel the Maine coast. In late September of 1968 we travel from a still hot and muggy Washington D. C. into an early New England Fall. Blue skies, changing leaves, and keen sea air fills our young lungs and quicken our hearts. Fellow Navy photographer Bart Clapsaddle and his wife Jeanie lead the way. Diane and I are two California kids being introduced to the wonders of down east. In a 1965 VW bug with a luggage rack full of camping gear, two sailors and their wives camp on beaches and stay in quaint wood-heated cabins. We lean about wine and cheese and find it better than beer and chips. First taste of lobster comes from the fisherman's hand and is cooked in outside our tent in a pot of seawater. Clam chowder is discovered in a fisherman's cafe, and no soup since has been as good. On the West Coast Diane I had grown up on tacos, now we are young adults who live on lobster rolls and breath crisp Atlantic air. It’s as if we’ve come to tour a quaint and foreign land that makes Orange County seem a spoiled land of plastic glitter.
Read More 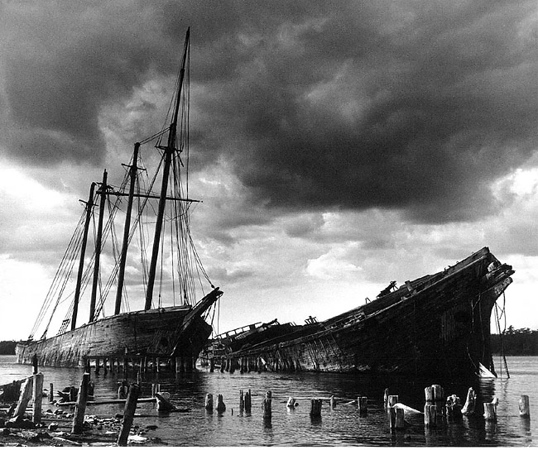 On the mud flats of the Sheepscot River in Wiscasset, for a century, the ships Hesper and the Luther Little wait. I arrive in a storm with camera in 1968. But, I print this negative for the first time in 1969 at Sangly Point in the Philippines. Navy photographer Ron Letarte, who happens to be from Maine, sees the image and loves the glimpse of home. Years later, a storm destroys the ships and Letarte tells the story to a newspaper friend. I send him a print. The local paper runs this picture 35 years after I snap the shutter.